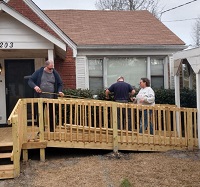 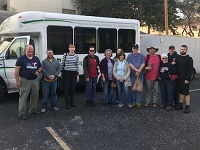 Hurricane Harvey was a catastrophic flood disaster dropping 40-61 inches of rainfall in southeast Texas from August 25-29, 2017. The floods inundated hundreds of thousands of homes, displaced more than 30,000 people, and prompted more than 17,000 rescues. It is tied with Katrina as the costliest tropical cyclone on record, costing almost $125 billion in damages. As we came closer to Corpus Christi, we could see the remaining evidence of this disaster in the piles of debris placed in the median of the highway, buildings missing roofs, and trees still down. Even though some work had been done, there was still a lot to do.

We worked on several projects during the week. Four tiny houses in a trailer court needed electricity run through them and steps made to have access to the houses. We cleaned up around some trailers that had been destroyed. In one house, new windows were put in and, in another, walls were removed due to the roof coming off and water getting into the house. Tarps were put over the damaged roofs of two houses to keep any additional water from going in. This was a difficult job as the winds were really strong and we were not sure that the tarps would stay in place.

The weather was cold, almost like being at home, except we had a beautiful view of the bay and the gulf. Because of the weather, it was hard to get a lot done, but we made progress and the people were glad for the help.

I have gone on a few trips with the Presbyterian Project and all of them have been a great experience. The people that make up the groups may change but it is always a great group of people. It is a joy to be able to help people who are facing hard times and to share the love of our Lord. 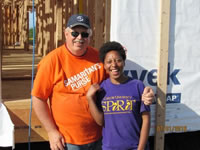 Dulcie, my daughter, was between jobs and getting quite bored. Deb Vita, my fellow choir member, knew that Dulcie had been to Laredo, Texas twice with Habitat for Humanity so she told me about a Samaritan’s Purse project in Alaska. (Samaritan’s Purse is a Christian humanitarian organization providing physical and spiritual aid to hurting people in over 100 countries around the world.) I asked Dulcie if she wanted to go to Alaska for a week and her reaction was “Alaska! No, it’s too cold! Why not some place like South Carolina?” After thinking it over, she changed her mind so we applied to SP for Dulcie to go to Togiak, Alaska. 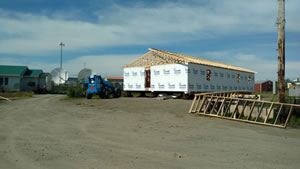 While at work a few weeks later, I received a call from SP to schedule Dulcie so I asked them to call her. When I got home, she told me that we would be going from June 26 to July 5. I said, “We?” God works in mysterious ways. When we arrived at base camp in Soldotna, Alaska, we were asked if we could go to Bethel, which was behind schedule, rather than Togiak. We said yes, so we were off to Bethel. The project was working on a new house for the Alaskan Moravian Seminar, established in 1955, which provides training for Native (Yupik Inuit tribe) Christians leaders. 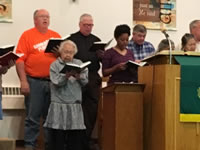 Bethel is a town of 6,000, approximately 400 air miles from Anchorage and 80 miles from the mouth of the Kuskokwim River. It’s a regional hub for 56 surrounding villages. It also has a severe drug and alcohol abuse problem.

We had a 10-person team. Dulcie was the youngest (25), then a pastor from Virginia (45), then me (59), with everyone else being older. We hailed from California, Maine, Colorado, North Carolina, Pennsylvania, Washington and Alaska. During our week, we framed the house, making it ready for the electrician and insulators to come the following week.

It was a fulfilling week and our presence there was a visible witness to the local people.

In January, our pastor and two GPC members went with a small team from the Presbyterian Project to Oklahoma City. The Oklahoma City suburbs experienced tremendous loss of life and property from tornadoes that swept through the area in May 2013. EF4 and EF5 tornadoes swept a mile-wide path that extended for 17 miles. The team worked with an organization called Samaritan’s Purse to renovate a home damaged by the storms.

In February, five members of GPC went with members of Elfinwild, Parkwood, and Fox Chapel Presbyterian to DuBois, which was hit hard by flooding in June 2013. They stayed at the First United Methodist Church and focused their efforts on indoor work, such as dry wall installation and floor repair.

In January, two mission teams with members from GPC, Elfinwild, Parkwood, and Fox Chapel Presbyterian churches went to Staten Island, which had been ravaged by Hurricane Sandy in late 2012. They stayed at Elim Christian Assembly Church and worked to repair homes that were heavily damaged by the storm.