From June 13-20, 2015, a group of youth and adult volunteers from GPC went to Baltimore, MD.  They partnered with Center Presbyterian Church (McMurray, PA) and The Center of Baltimore Presbytery on various service projects.

Two groups were formed from our combined churches. One group spent the week helping with a summer camp at Dickey Memorial Presbyterian Church and the other spent the week at Amazing Grace Lutheran Church helping with their urban gardens, after school program, and soup kitchen. Together, the groups spent a day in Washington D.C. learning from the PC(USA) Office of Public Witness.

One of the youth participants, Ryan Hills, shares his experiences from the trip:

Let’s be honest, a mission trip to Baltimore didn’t sound like a good idea, especially after the events of the past few months. I didn’t know what to expect or even if we would make a difference to this historically troubled city. Despite this, we were optimistic for what tasks were ahead. After all, we were on a mission to do God’s will and with him on our side, what is there to fear? (Romans 8:31)

There was one mission between three churches; to share God’s amazing love with the city of Baltimore. Pastor Kate (director of The Center in Baltimore) told us that this would probably be one of our hardest missions yet. It would not be physically hard as much as mentally and emotionally. We were to cross boundaries of the community and of our own comfort zones; to love where most hate. Throughout the week, we were exposed to the ignored faults and the injustice in our society. As sheltered as I am, I did not expect to hear any of this. Our visit to the PC(USA) Office of Public Witness showed us the injustice in the American prison system, as well as ways that we as Christians can help. I thought racism was a dying attitude and the world was moving on. Ignorance stole my glance at what society really was and still is. As a Christian, I felt very troubled by this. I sensed insecurity within me. I felt more of a need to do something about this.

Throughout the week, I had the opportunity to serve alongside members of Dickey Memorial Presbyterian Church at a summer camp developed from an afterschool program. All of the kids at the camp were black, elementary school-aged from an under-resourced area school. As we worked with these children, I began to see the ways boundaries of race and lack of trust can be crossed. We saw the love that members of Dickey Memorial had for these kids and had the joy of building relationship with them – not only as role models, but as brothers and sisters in Christ. Seeing the children’s enthusiasm to learn and have fun, and watching their imagination glow with their hearts on their sleeves was an experience I won’t soon forget.

Teaching these kids has actually taught us some valuable lessons, like patience. It also helps us see how unique and amazing God has made each and every one of these kids. This trip has really changed how I see the world. Pastor Kate was right in saying this would be the most challenging one yet. A boundary, such as racial injustice, is a challenge that can only be met with the peace of Christ. 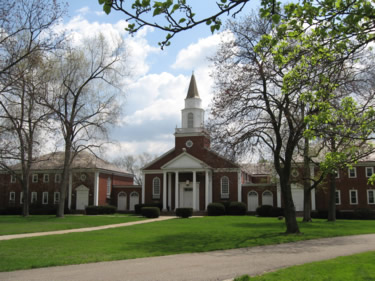 In compliance with Governor Wolf's stay-at-home order, and to help stop the spread of COVID-19, Glenshaw Presbyterian Church will continue to be closed until further notice.